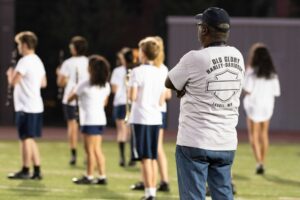 What do you need for Band Camp?

The award-winning W-L Marching Generals consists of the marching band with pit percussion, the drum line, and the color guard. These units attend three weeks of band camp before the school year starts to be ready for September parades and half-time shows. They travel to competitions throughout Virginia, play at home games and other school functions, and represent W-L High School at performances in Arlington through mid-November. On occasion, they participate in spring competitions and parades. Marching band members receive a half-year course credit. Grading is based on participation and proficiency. The marching band and pit percussion consist mostly of upperclassmen from the symphonic band, with a few talented freshmen as well. All symphonic band students are members of the marching band, and most class time in September and October is devoted to marching music. The pit percussion plays the larger, non-marching percussion instruments along the sideline. The band practices after school in sectional rehearsals as well as the complete band unit.

The drum line marches as part of the band during half time shows and parades. In addition, the group performs special percussion features on its own, which are prepared during student-led after school practice sessions.

The color guard performs both with the marching band and independently. Members are selected by auditions held in the spring. In the fall they choose their outfits, flags and accessories and choreograph their routine consistent with the band’s music. The color guard is judged separately at marching band competitions, and its success is critical to the high ratings received by the Marching Generals.

View all of the photographs of this show season at: https://washingtonleebands20172018.shutterfly.com/    [private, requires sign-in and permission]

View all of the photographs of this show season at: https://washingtonleebands20172018.shutterfly.com/1329    [private, requires sign-in and permission]

View all of the photographs of this dangerously debonair, James Bond inspired show season at: http://wlbands20162017.shutterfly.com

View hundreds of fabulous photographs of this show season at: http://wlbands20152016.shutterfly.com

View hundreds of fabulous photographs of this show season at: http://wlbands20142015.shutterfly.com